Book 1: Love is All Around 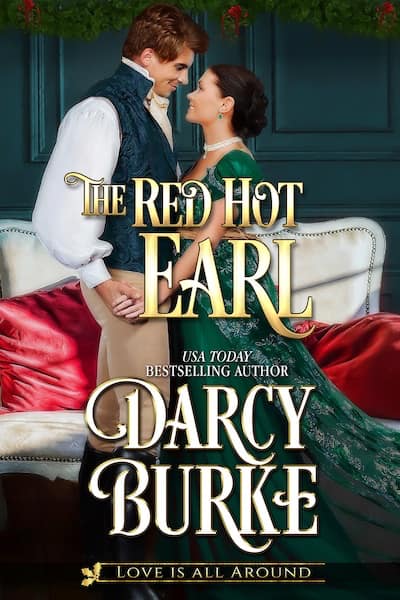 “Come to Thornaby’s house party with me. Please.” Lady Bianca Stafford didn’t want to beg her brother, but she was close to doing so.

Calder Stafford, the eighth Duke of Hartwell, pressed his lips into a thin white line, absolutely unmoved by her passionate pleas. “There is no reason for me to attend, nor do I have any desire.”

Bianca walked around his desk, forcing him to turn his head to follow her movements. She stood next to his chair and gave him her most earnest stare. “There’s every reason. This is the start of the holiday season. It’s where the informal planning for the annual St. Stephen’s Day party happens. You must come.”

He pinched the bridge of his aquiline nose. “Bianca, I am not going to host a St. Stephen’s Day party.”

She couldn’t keep herself from gasping. “You can’t be serious. We always host the St. Stephen’s Day party.” It wasn’t a party, it was the party. The entire town came, and it was the very center of the Christmas season.

He dropped his hand to the arm of his chair and stared up at her unblinking, his dark gray eyes as cold and unyielding as the nickname some still used for him: Chill. Because he’d been the Earl of Chilton his whole life. Until their father’s death seven months ago.

Regret and sadness squeezed Bianca’s heart, because of the loss of their father and because of the vast breach between him and Calder that had never been healed.

“I am not hosting it, and that is the end of it.” His tone was soft but sharp.

She gaped at him, unable to find words for what seemed an eternity. “But, but—” she stuttered before snapping her lips closed at the distaste in her brother’s eyes. How he’d become such a remote, unfeeling person was beyond her. But then she’d rarely seen him the past ten years while he’d lived in London. He’d never come home, not once.

Taking a deep breath, she sought to calm her racing heart and outraged mind. “Calder.” She used the name their sister Poppy had always called him. The name their mother, who had died a few days after giving birth to Bianca, had used, or so Poppy had told her. “You have a duty as the duke.”

“I have many duties, and none of them include hosting a St. Stephen’s Day party.” He turned his attention back to his desk and the papers upon it. “Now, run along to your house party.”

His condescending tone grated. She would go as soon as Poppy, who was the Marchioness of Darlington, arrived to act as her chaperone. “Your tenants adore the St. Stephen’s Day party. It is the highlight of their year. Surely that’s important.”

Grumbling low in her throat, Bianca glared at her older brother’s bent head. “Papa would be disappointed. He’s likely spinning in his grave.”

Silence was her answer, and so she turned and stalked from his study, not stopping until she nearly ran into Poppy in the entrance hall.

“Goodness, you look as if you want to commit murder,” Poppy said, her gray-blue eyes wide. “Well, perhaps not murder. That’s rather gruesome.”

“In this case, however, it’s accurate. I would cheerfully choke our brother if I could manage it.”

Poppy exhaled. “Should I go and speak with him?”

“You don’t even know why I wish to strangle him,” Bianca said.

“I feel certain you will tell me.”

“Yes, yes, I talk too much.” Bianca waved her hand. “In this case, I could talk until my tongue fell out, and I’m afraid it wouldn’t matter. Calder refuses to host the St. Stephen’s Day party.” Just saying it aloud deepened her anger.

Poppy’s delicate dark brows arched high upon her forehead. “You found this surprising given his behavior the past six months since he returned?”

“Yes.” But she shouldn’t have. Still, she’d hoped. “How can he not care about the tenants and how important that day is to them?” The day after Christmas, it was a time for everyone in and around the village of Hartwell and the estate of Hartwood to come together and celebrate, to cast off their cares and responsibilities and rejoice in fellowship and love.

“The day can still be important. It will just be up to you to make it that way.” Poppy gave her a supportive smile. “I would offer to help, but…” Her voice faltered, and a shadow dashed through her eyes.

Bianca reached for her sister’s gloved hand and gave it a squeeze. “I wouldn’t ask.” Poppy was going through a difficult time, and it was more than enough that she’d consented to accompany Bianca to this three-day party at Thornhill, the Viscount Thornaby’s estate an hour away.

“Thank you, darling,” Poppy said, squeezing her hand in return. “The footman is loading your luggage onto my coach. Are you ready?”

“I am.” Bianca cast a sad look back toward their brother’s study. She still had time to change his mind. But not much.

Her maid, Donnelly, entered the hall with Bianca’s accessories. When she’d donned her hat, cape, and gloves, they departed the house. The Darlington coach awaited them outside, Poppy’s maid ensconced within.

Once they were on their way, Bianca turned toward her sister, her mind churning. “We’ll have to be careful not to reveal Calder’s hesitance to host the party. I don’t want anyone to know he was against it, even for a moment.”

Poppy blinked at her, then pursed her lips. “Bianca, he is against it. And not just for a moment. He isn’t going to change his decision. You must let it go, unfortunately.”

“I refuse. It’s tradition—the village of Hartwell will be devastated if it doesn’t go on as it has for the past… I don’t know how long.”

“I’ve heard there has been a celebration of some kind since the first duke, even under Cromwell when it was forbidden to celebrate Christmas.” Poppy glanced out the window, a dark curl bobbing against her temple beneath the brim of her smart pine-green bonnet. “However, Calder is the duke now. It is up to him to continue the tradition. Or not.”

Frustrated at her sister’s lack of outrage, Bianca stared at the passing landscape. The fields were hard and barren with the onset of winter, the hedges rich and green beneath the naked branches of the trees. Turning her head to look at her sister once more, she asked, “Aren’t you the least bit disappointed?”

“Of course I am. But I am far more disappointed with other matters.” She looked out the window and murmured, “Never mind.”

Bianca tamped down her irritation. Poppy had other concerns. “I apologize. This isn’t your worry. It’s mine.” And she’d ensure the party happened. She had to. Maybe Calder didn’t care about tradition or about spreading goodwill amongst the people of Hartwell and the retainers and tenants of Hartwood, but Bianca did.

Several minutes passed before Poppy made a quiet observation. “I can see your mind working.”

Bianca’s mouth tilted into a half smile in spite of herself. “Can you?”

Poppy chuckled softly. “It never stops. And that is a compliment. Your ever-turning brain is what makes you Bianca.”

It also made her unwed. Most gentlemen, it turned out, did not care for a wife with excessive opinions and a penchant for sharing them. Not that she’d spent much time concerning herself with finding a husband.

At twenty-two, she was a tad overdue on the Marriage Mart, owing to her father’s illness the past few years. Beyond that, she had no desire to have a Season in London. She loved Hartwell and the surrounding area, and, if she had to marry—and she wasn’t certain she did—would much prefer to marry a local gentleman. The problem was that there weren’t very many of them who hadn’t gone off to war. There would be several at the house party, however, including Viscount Thornaby himself.

She didn’t want to marry Thornaby or anyone else at this juncture, but perhaps he would be interested in taking up where Calder refused regarding the party. Thornhill was an hour by carriage, and even longer by foot, which made the location less than ideal, but if it was all she could find… Yes, she’d take the opportunity of this house party to devise a contingency plan. Just in case Calder proved exceptionally stubborn.

She feared it was the latter. The brother who’d returned from London was not the brother she remembered from her youth. But then neither was her sister. She slid a look at Poppy. Faint lines pulled at her eyes and mouth as she gazed out the window, making her look slightly older than her twenty-four years. Bianca wished her sister would share more of her struggles, but she didn’t.

Sometimes Bianca wondered if she wasn’t really from the same family as her older brother and sister. Both Calder and Poppy held their emotions close, while Bianca displayed hers for everyone to see. Papa had said she was just like her mother. How Bianca wished she could have known that for herself.

Oh, this was turning into a melancholy day! Bianca straightened her shoulders and pressed her spine against the squab. It was nearly her favorite time of year—the time when people were more apt to share themselves and find joy. A time of peace and happiness.

And she wouldn’t let Calder ruin it. The St. Stephen’s Day party would happen at Hartwood. She refused to accept anything else.

Return to The Red Hot Earl

Love is All Around 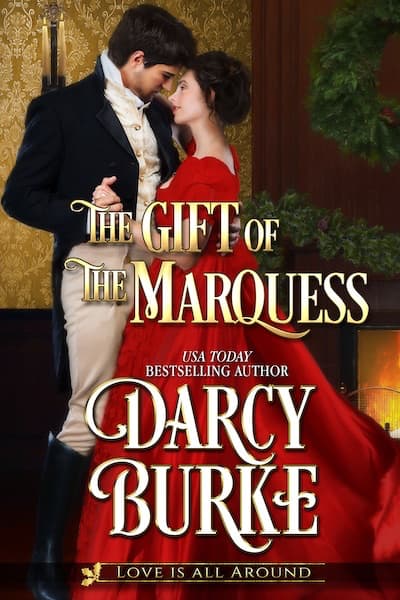 The Gift of the MarquessBook 2 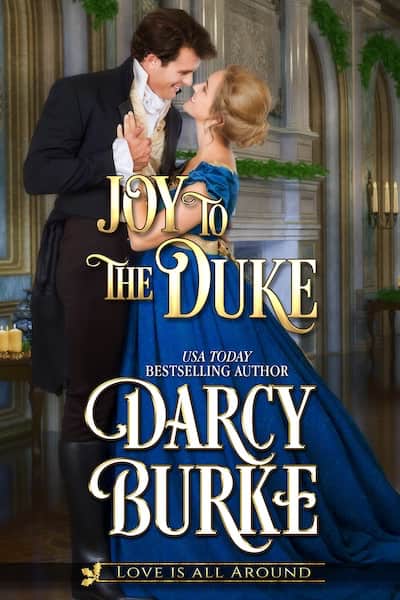 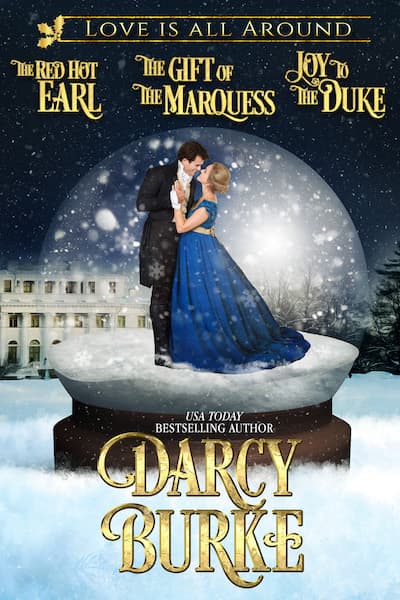