Tori Archer sipped her Nocktoberfest, Dad’s signature beer for the annual Ribbon Ridge Oktoberfest, which was currently in full swing. She clung to the corner of the huge tent, defensively watching for her “date” or one of her annoying siblings that had forced her to go on this “date.”

It wasn’t really a date. He was a professional colleague, and the Archers had invited him to their signature event. For nine years, the family had sponsored the town’s Oktoberfest. It featured Archer beer and this year, for the first time, a German feast overseen by her brother Kyle, who was an even more amazing chef than they’d all realized. Today was day three of the festival and she still wasn’t tired of the fondue. But really, could one ever tire of cheese?

Tori jumped, splashing a few drops of beer from her plastic mug into her fingers. She turned her head and glared at Kyle. “Did you sneak through the flap in the corner behind me?”

“Guilty.” He wore an apron tied around his waist and a custom Archer shirt, which read CHEF below the bow and arrow A-shaped logo. “How else was I supposed to talk to you? You’ve been avoiding everyone for the past hour and a half. Where’s Cade?” He scanned the crowd looking for her not-date, the engineer they’d hired to work on The Alex, the hotel and restaurant venue they’d been renovating since last spring. With a special events space already completed, they’d turned their focus to the restaurant and would tackle the hotel next.

Tori took a drink of the dark amber Nocktoberfest and relished the hoppy flavor. “Don’t know.”

Kyle gave her a sidelong glance. “Didn’t you come together?”

“No. Though it wasn’t for your lack of trying. I met him here. We chatted. He saw someone he knew. I excused myself to get a beer.” An hour ago.

Kyle turned toward her and frowned. “I don’t get it. Lurking in corners isn’t your style. You’re typically the life of the party. You work a room better than anyone I know, except maybe Liam.”

Tori narrowed her eyes. “I’m better at it than he is.” Their brother Liam, a successful real estate magnate in Denver, possessed many of the same qualities she did: ambition, drive, and an absolute hatred of failure. Then again, who wanted to fail? But it was more than that for them. Failure was never an option.

Which didn’t mean that it didn’t occasionally come up and take a piece out of you when you were already down for the count.

Kyle snorted. “Yeah, whatever. You two can duke it out at Christmas or whenever Liam decides to deign us with his presence.”

Tori touched his arm. “Hey, don’t take his absence personally. He keeps his visits pretty few and far between, even before you moved back home. Which is more than I can say for you when you were in Florida.”

Kyle’s eyes clouded briefly with regret and he looked away. “Yeah, I know. And hopefully some day you’ll stop giving me shit about it.”

She laughed. “Too soon? I’m not mad at you for leaving anymore. I get why you had to go, but I’m your sister. I will always flip you shit about stuff like that. It’s my job.”

It seemed that since Kyle and their sister Sara had both found their soul mates this year they expected everyone else to do the same. Granted, their adopted brother Derek had also found his true love, and they’d gotten married in August. What none of them knew, however, was that Tori was already spoken for—at least on paper.

Kyle set his hands on his hips. “We don’t get it.” His use of ‘we’ signified an informal Archer family committee. The kind that organized on a whim to solve another family member’s ‘problem’ that wasn’t really a problem at all. “He’s smart, good looking, wicked successful. And you have tons of stuff in common. He even runs marathons for Christ’s sake.”

Tori sipped her beer and tuned her attention to the crowd so she could stop looking at Kyle’s well-meaning face. She’d carved out a nice little pity party for herself over the past seven months and she wasn’t ready to call it quits. And why was that? Because then she’d have to face the music. She suppressed a tremor of unease. “I’ll go ahead and order Save the Date cards. Will you leave me alone now?”

Kyle blew out a breath and threw his hands up. “Fine. You’re weirding us all out, you know. Even Mom and Dad are worried about you.”

Mom and Dad had taken Alex’s death even harder than Tori had, which was to be expected of course. Their marriage had suffered, but after spending a few months with their youngest brother Hayden in France, Mom had returned for Derek’s wedding and things between she and Dad had seemed to improve.

“Did they talk to you about me?” she asked softly, dreading the answer. Worst case scenario, they’d had a family meeting.

“Individually. They still aren’t quite simpatico.” He tossed her a look tinged with sorrow. They all wanted their parents to get back to their happy place, but none of them were sure it was even possible. “They know you’re still struggling with Alex’s suicide.”

His lips curved down. “Don’t be obnoxious. You’re having a tough time so don’t bother hiding it.” Yes she was, but it wasn’t Alex’s death alone. Not that any of them knew that.

“Do I need to worry about an intervention?” Then she’d have to come clean about her secret. Or would she? If she could get this divorce going maybe they’d never have to know about her Giant Failure. Monday she’d get right on that. But first she had to find out when Sean was due back in the States.

Kyle chuckled. “Not quite yet.” He sobered. “Listen, if you really aren’t into Cade, I’ll drop it. Maggie’s already told me to lay off—that you’ll get back to your old self in time. Or find your new self. Whatever.” He shook his head. His girlfriend was a former therapist and had become a close friend to Tori over the last few months. If she could tell anyone the truth, it would probably be Maggie.

“I’d appreciate you doing that. And getting everyone else to do the same. Cade’s great. Just not for me. At least, not right now.”

Kyle nodded. “We only want you to be happy. You carry such a dark cloud.” He grazed his fingertips across her forehead.

She looked up at him from her five feet nine inches and allowed herself to smile. “It’s lightening. Slowly. But it is. You being here helps a lot. I’m so glad you’re home.”

Kyle smiled down at her and took off into the crowd. Tori finished her beer. Time for another. Or, she could just escape and go home. Home being her parents’ house where they’d all grown up.

“Tori!” Sara, the only other girl besides Mom in their crazy family, waved her over to where she stood with Kyle’s girlfriend, Maggie, and Derek’s wife, Chloe. “We’ve been looking for you.”

“Here I am.” Again, she forced a smile she didn’t really feel. She held up her empty mug. “Just heading to refill my beer.” Not really, but if she told them she was leaving, they’d do everything in their power to stop her, just shy of tying her to a chair. On second thought, Archers could be ruthless, even the women. Maybe they would tie her to a chair. Or a tent pole, since the tent lacked chairs.

“No need,” Chloe said, reaching to the tall table just behind her and picking up a half-empty pitcher. “You drinking Nocktoberfest?”

Tori held out her mug for Chloe to fill it. “Yes,” she glanced at their mugs, noting that Sara’s was empty enough that she couldn’t tell what it held, “but I’m surprised Sara is.”

She made a face, sticking out her tongue. “Not a chance. You know me and beer. This is hard cider. Dad’s finally caved to my demands to make a special batch for the holidays. Can’t wait!”

They chatted about cider versus beer for a few minutes during which Tori became more and more impatient to leave. While it was true she once adored functions like this, they’d become painful to endure since Alex’s death. She hadn’t even been able to enjoy Derek and Chloe’s wedding in August. The combination of marrying Sean and losing Alex the very next morning had ensured weddings in particular were difficult, but she had to admit that all social events had become a challenge for her. And why was that? Because she was depressed? Because she felt guilty? Yes and yes.

Chloe let out a low whistle that sounded like it belonged on a construction site coming out of the mouth of a brawny foreman. “Yeah, that one’s hot.”

Sara turned to look at her and Maggie who were perusing the crowd. “Are you checking out men who aren’t your husband or boyfriend?”

“Yeah, you want to join us?” Maggie said, sipping her beer. “Ten o’clock, hottie with brown hair and stubble.”

“Nice,” Sara said, dropping her hands from her arms.

Tori exhaled, feeling better that Sara’s senses weren’t spun up. And since they were all occupied, she could finally excuse herself.

“I like that one better,” Sara said. “Two o’clock, near the bar. Dark wavy hair, great outfit.”

“Are those tailored jeans?” Maggie asked, leaning forward and squinting for comic effect. Both Sara and Chloe laughed.

Tori turned her head to check this guy out for herself. And nearly dropped her beer.

“I’m totally telling Kyle, and you can thank me,” Sara said. “He does a great Scottish accent.”

They all laughed while Tori’s insides curled into a nausea-inducing mass. She had to get out of here pronto. “I’ll leave you to your browsing.” She turned to go and stopped short as the man they were discussing wove toward them. Move, Tori. Pick up your feet and move. But she couldn’t. It was as if she’d rooted to the floor.

“He must’ve seen us staring.” Chloe laughed, her eyes dancing. “Oops. Guess we’ll have to blame it on Tori since she’s the only single one of us. Don’t want him thinking we’re interested!”

“No, don’t do that,” Sara said, flicking a nervous glance at Tori. “Tori isn’t interested either.”

Tori stifled a ridiculous urge to laugh. She’d been more than interested. Once. God, that felt like a lifetime ago. She braced herself as he came to stand before them.

And stared directly at her, his deep blue eyes seeming to bore straight to her soul.

“Hi ladies.” Was he going to pretend they didn’t know each other?

“Thank you. It reminds me of villages back home—quite lovely.” His gaze was glued to Tori as he said lovely. His English accent flowed over Tori, eliciting the same visceral response she’d had when she’d met him nine months ago. Maggie might dig British accents, but for Tori, they were auditory aphrodisiacs. Especially when paired with lush cobalt eyes and a smile that could melt a glacier.

Return to When Love Happens 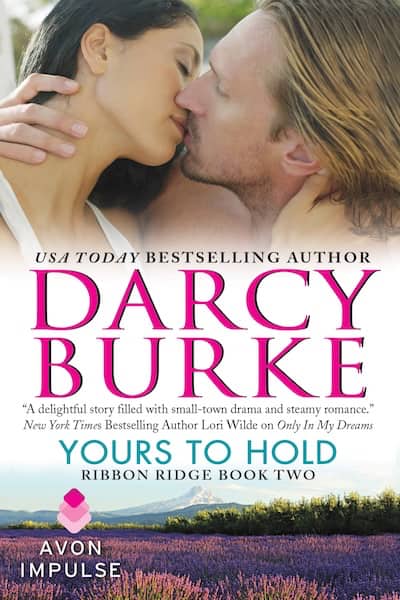 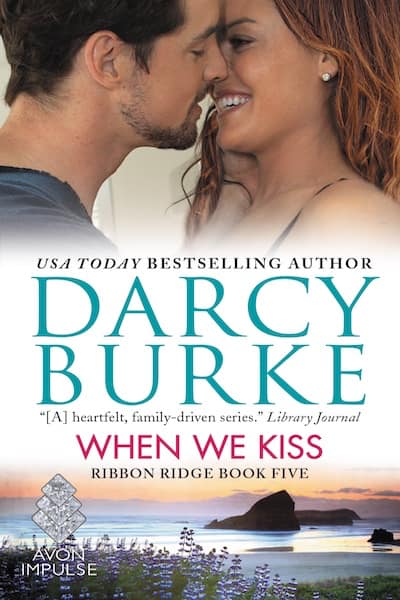 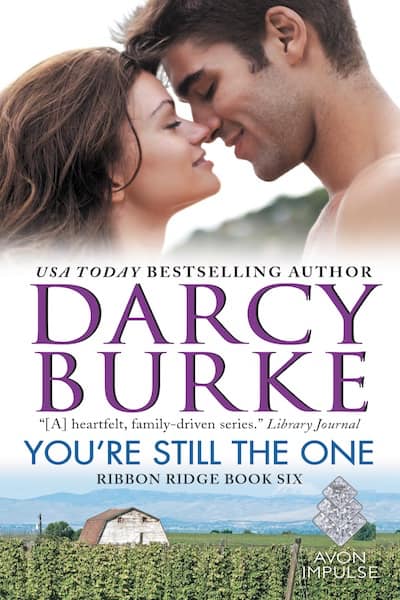